I’ve finally made it to the off-season!

It has been a rough year for the peloton in terms of injury and illness–those riders who have managed to stay healthy the whole year find themselves especially battle-weary, struggling to find motivation. Despite some nagging pains from a particularly hard crash at Eneco Tour and Vattenfall, I was full of motivation for my North American tour through Canada ahead of the World Championships Team Time Trial, my only race in the US this year.

We arrived in Alberta a couple of days before the race, allowing us time to spin our legs out and adjust to the time change. While the houses, roads, and vehicles may have reminded me of home, I knew I was a long way from Texas when we completed our rides without a single truck buzzing us while rollin’ coal and giving the one-fingered salute.

The Tour of Alberta, my first non-WorldTour race since March, was a change of pace. With a smaller bunch on bigger roads, getting to the front lacked the sense of accomplishment that follows the same action in Europe. I enjoyed the racing, although the weather sent me into some dark places mentally, my nice summer tan buried beneath layers of winter and rain clothing that had long ago drifted to the bottom of the drawer. I did manage to pass some of the miserable times more quickly by catching up with friends I hadn’t seen in a year, although I think my teammates were confused by my exceedingly social behavior.

My performances in Canada were less than I’d hoped for, as I found that my tolerance for suffering was lacking–the motivation I’d built up for this trip had shifted entirely to the World Championships. The show must go on, though, and soon we were in the glorious United States of America, where the temperature would be in the 80’s all week but we wore hoodies because the AC was stuck at “American extravagance.”

If you haven’t seen it yet, here’s my Velonews journal about the TTT.

After returning to Europe entirely too soon, I set to work training for my final race of the season–and my second Monument–Il Lombardia. I spent a lot of time trying to ride at threshold on longer climbs to simulate the race, just to remind my legs what sustained climbing felt like. It was obvious that my targeted training for the punchy climbs of Canada and the burst efforts of a TTT had worked, as I had to really fight to make my legs settle into a rhythm.

When it came time to race, my legs were okay but my mind was not as sharp as it needed to be. The race was really hard and I just couldn’t push myself as hard as I needed to. My race season started in January and I was just ready to be done.

Looking back on the season, my favorite moments include: perfect leadouts resulting in John’s win in Dubai and Luka’s in Haut-Var, contributing to John’s amazing win in Milano-Sanremo (my first monument), finishing the Giro with a top-10 on stage 18 and top-20 in the TT, and finally our 5th place in the World Champs TTT. I finished the season wanting more, though, as I felt like I never really reached top form, always trying to catch up after a crash or travel. I can still be pleased with all that I accomplished, racking up 77 race days this year. That’s only 3 more than last year, but in 2014 I only had 37 WorldTour races…this year I had 61! So on average the races I did were much harder.

I only have 12 more days on this side of the pond, and I’m very much looking forward to hitting the dirt with my mountain bike on my return–I even spent this morning ordering all the stuff I need to get it rolling again.

Some bonus stuff for you:

The first video we recorded a couple months ago…

Data dorks, in case you missed it last year, here’s my CTL (level of fatigue for the less-dorky readers) graph from the 2014 season, followed by the 2015 graph.

In 2014, you can see the periodized build in training and the smaller stage races I did. Then Catalunya and Circuit de la Sarthe before the triple-peak of California, Belgium Tour, and Dauphine. Following a break, there’s training camp, Vuelta Burgos, ad Vuelta Espana before TTT Worlds.

For 2015, you can see that my periodized training was interrupted by the flu and the week-long travel to Australia. The TDU kicked off racing before some smaller stage races. Then it was Tirreno, Milano-Sanremo, and Criterium Internationale before a break. Romandie preceded the Giro and Dauphine double peak, pushing me to 60 race days before my summer break. After a training camp, you can see that it was 2 months of short races and training blocks. As a result, I enter this off-season less fatigued than last year, which means I can do more mountain biking without needing to worry about fatigue before training starts again! 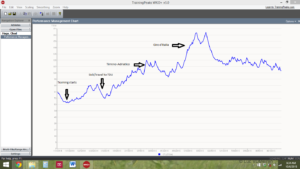 For the astute readers who can read between the lines, yes, I have put pen to paper and secured a job for next year. That’s all you get for now until the official announcement….